Inspired by BoingBoing’s notice of my post on Syd Hoff’s leftist cartoons, I’m sharing another letter from the late Mr. Hoff, along with a cartoon from 1939. As those who remember his first letter to me might recall, he and I corresponded – and spoke over the phone a few times – when I was working on Crockett Johnson and Ruth Krauss: How an Unlikely Couple Found Love, Dodged the FBI, and Transformed Children’s Literature (due out in fall 2012 from the University Press of Mississippi).

In the 1930s, Crockett Johnson was New Masses’ art editor, and Hoff contributed cartoons under the name A. Redfield – a pseudonym he reserved for his New Masses and Daily Worker pieces. Here’s the first page of his third letter to me, followed by a transcription of the same. He dated it July 1, 2000, but he intended to write August 1, 2000. (His first letter was July 8, 2000, and his second was July 15, 2000; the one below was posted August 1st.) The “Dave” you’ll see mentioned is Crockett Johnson, whose real name was David Johnson Leisk and who was known to his friends as “Dave.” 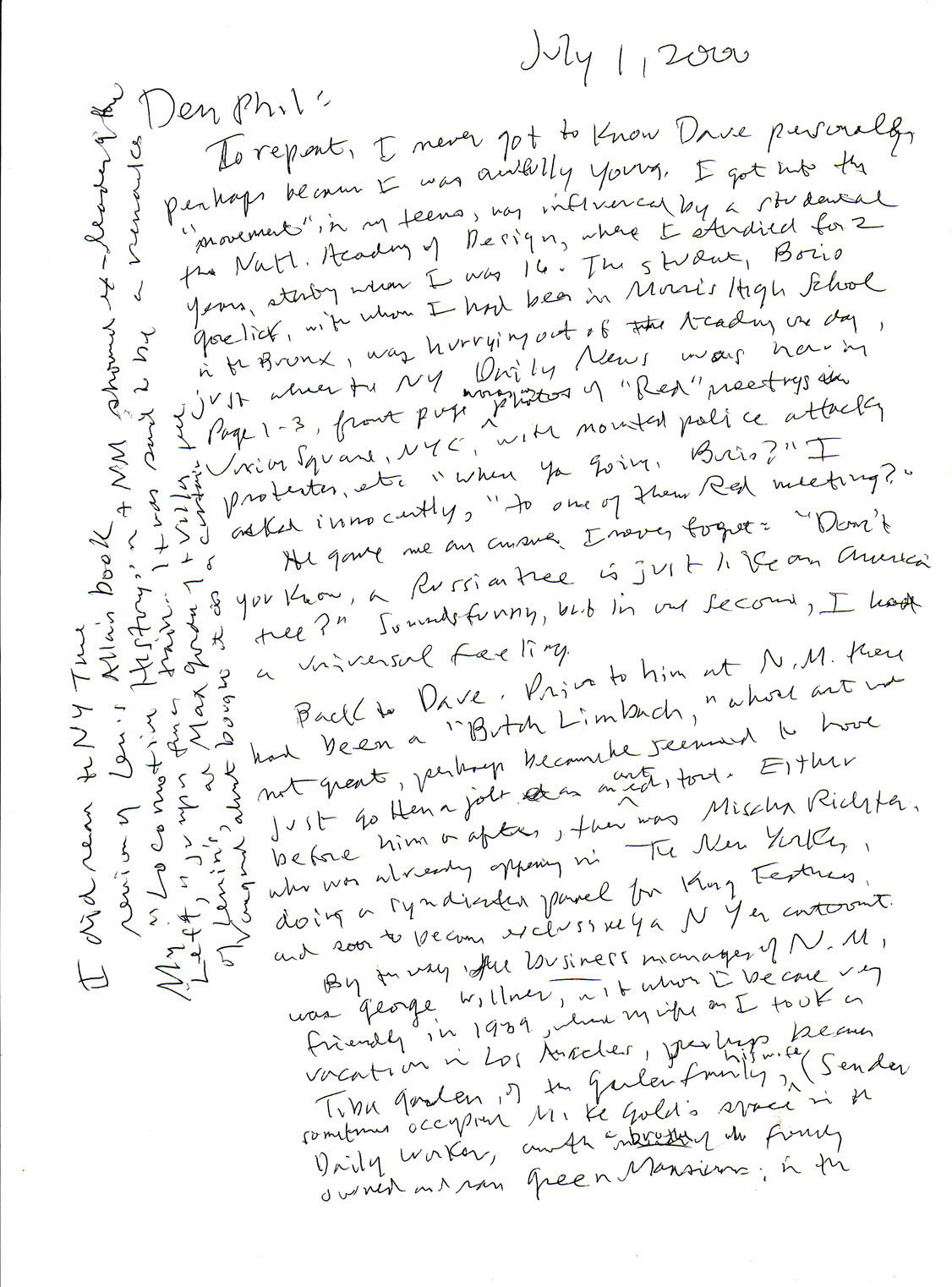 Here’s the transcription, with “[?]” marking places where I’m unsure if my transcription is correct, and brackets [] indicating my own interpolated text:

To repeat, I never got to know Dave personally, perhaps because I was awfully young.  I got into the “movement” in my teens, was influenced by a student at the Natl. Academy of Design, where I studied for 2 years, starting when I was 16. The student, Boris Gorelick, with whom I had been in Morris High School in the Bronx, was hurrying out of the Academy one day, just when the NY Daily News has having page 1-3, front page words and photos of “Red” meetings in Union Square, NYC, with mounted police attacking protesters, etc. “Where ya going, Boris?” I asked innocently, “to one of them Red meetings?”

He gave me an answer I never forgot: “Don’t you know, a Russian tree is just like an American tree?”  Sounds funny, but in one second, I had a universal feeling.

Back to Dave. Prior to him at N.M. there had been a “Butch Limbach,” whose art was not great, perhaps because he seemed to have just gotten a jolt as an art editor.  Either before him or after, there was Mischa Richter, who was already appearing in The New Yorker, doing a syndicated panel for King Features, and soon to become a successful NYer cartoonist.

[Marginal note, running horizontally next to the above three paragraphs:] I did read the NY Times review of Lewis Allan’s book My “Locomotive History” — + NM showed ex-leaders of the Left, “jumping from a train..Â  It was said to be a remark of Lenin’s, and Max Gordon of Village Vanguard almost bought it as a curtain trim[?].

By the way, the business manager of N.M. was George Willner, with whom I became very friendly in 1939, when my wife and I took a vacation in Los Angeles, perhaps because Tiba Garlin, of the Garlin family, his wife (Sender sometimes occupied Mike Gold’s space in the Daily worker, with a brother member of the family owned and ran Green Mansions, in the

The “Locomotive History” comment references a Syd Hoff cartoon, published 28 November 1939.  It comments on all those who, after the Hitler-Stalin Pact of August 1939, left the Communist Party.  Riffing on Marx’s idea (and Lenin’s claim) that revolution is the locomotive of history, Hoff shows the locomotive leaving behind all those who have deserted the Party – suggesting that they’ve made a mistake in doing so. 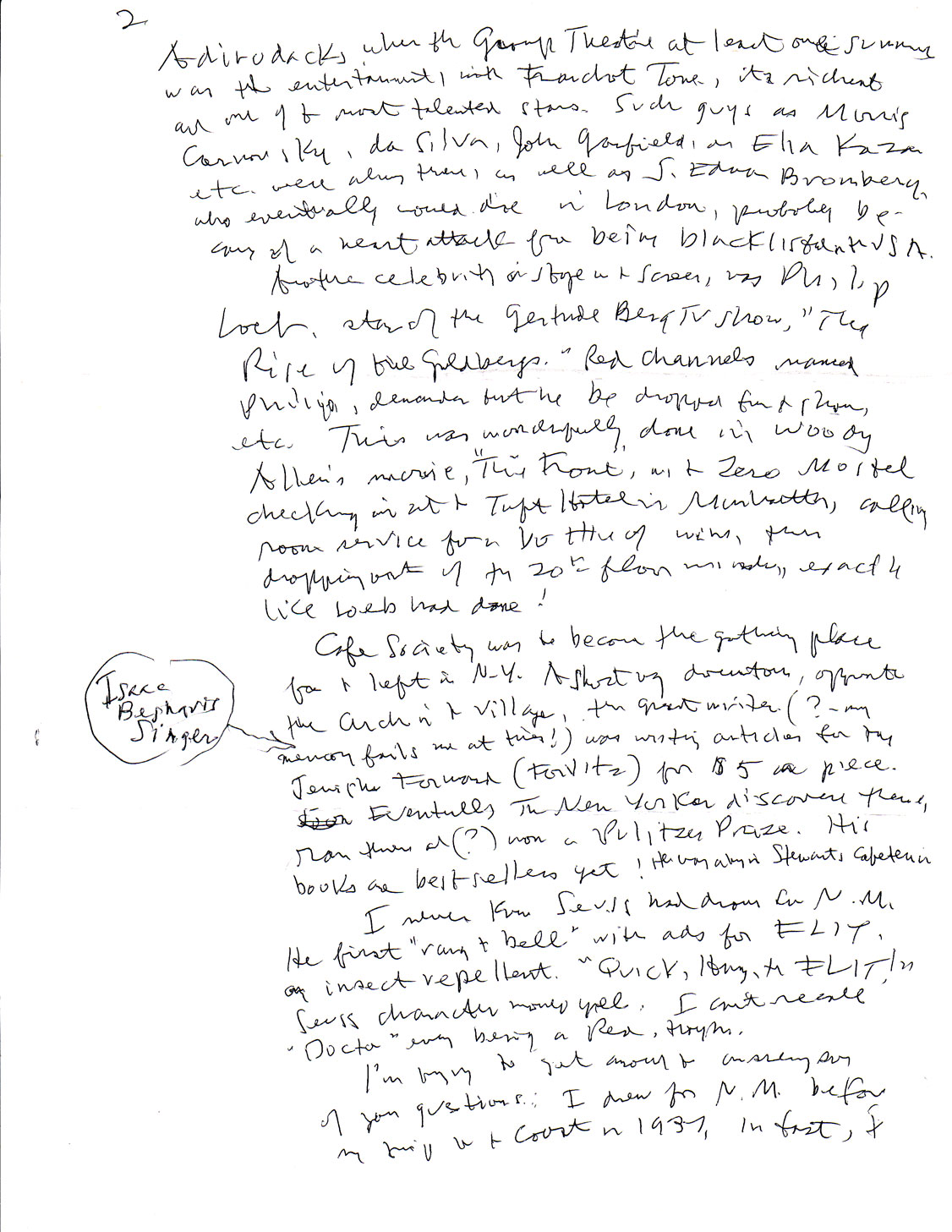 The transcription of page two:

Adirondacks, when the Group Theatre at least one summer was the entertainment, with Franchot Tone, its richest and one of its most talented stars.  Such guys as Morris Carnovsky, da Silva, John Garfield, and Elia Kazan etc. were always there, as well as S. Edna Bromberg[?], who eventually would die in London, probably because of a heart attack from being blacklisted in the U.S.A.

Another celebrity in stage and screen, was Philip Loeb, star of the Gertrude Berg TV show, “The Rise of the Goldbergs.”  Red Channels named Philip, demanded that he be dropped from the show, etc.  This was wonderfully done in Woody Allen’s movie, “The Front,” with Zero Mostel checking in at the Taft Hotel in Manhattan, calling room service for a bottle of wine, then dropping out of the 20th floor window, exactly like Loeb had done!

Cafe Society was to become the gathering place for the left in N.Y.  A short way downtown, opposite the Arch in the Village, the great writer (? — my memory fails me at times!) was writing articles for the Jewish Forward (Forvitz) for $5 a piece.  Eventually The New Yorker discovered these, ran them all (?) won a Pulitzer Prize.  His books are bestsellers yet!  He was always in Stewarts Cafeteria.

I never knew Seuss had drawn for N.M.  He first “rang a bell” with ads for FLIT, an insect repellent.  “QUICK, Henry, the FLIT!” Seuss character would yell.  I can’t recall “Doctor” ever being a red, though.

I’m trying to get around to answering some of your questions.  I drew for N.M. before my trip to the Coast in 1937, in fact, I

A correction: Dr. Seuss drew cartoons for PM, not for NM (New Masses).  Hoff’s misreading my letter to him, in which I mention Seuss’s work for PM.  Hoff is right about Seuss not “ever being a red, though.”  Dr. Seuss was a liberal Democrat, but he wasn’t a leftist. 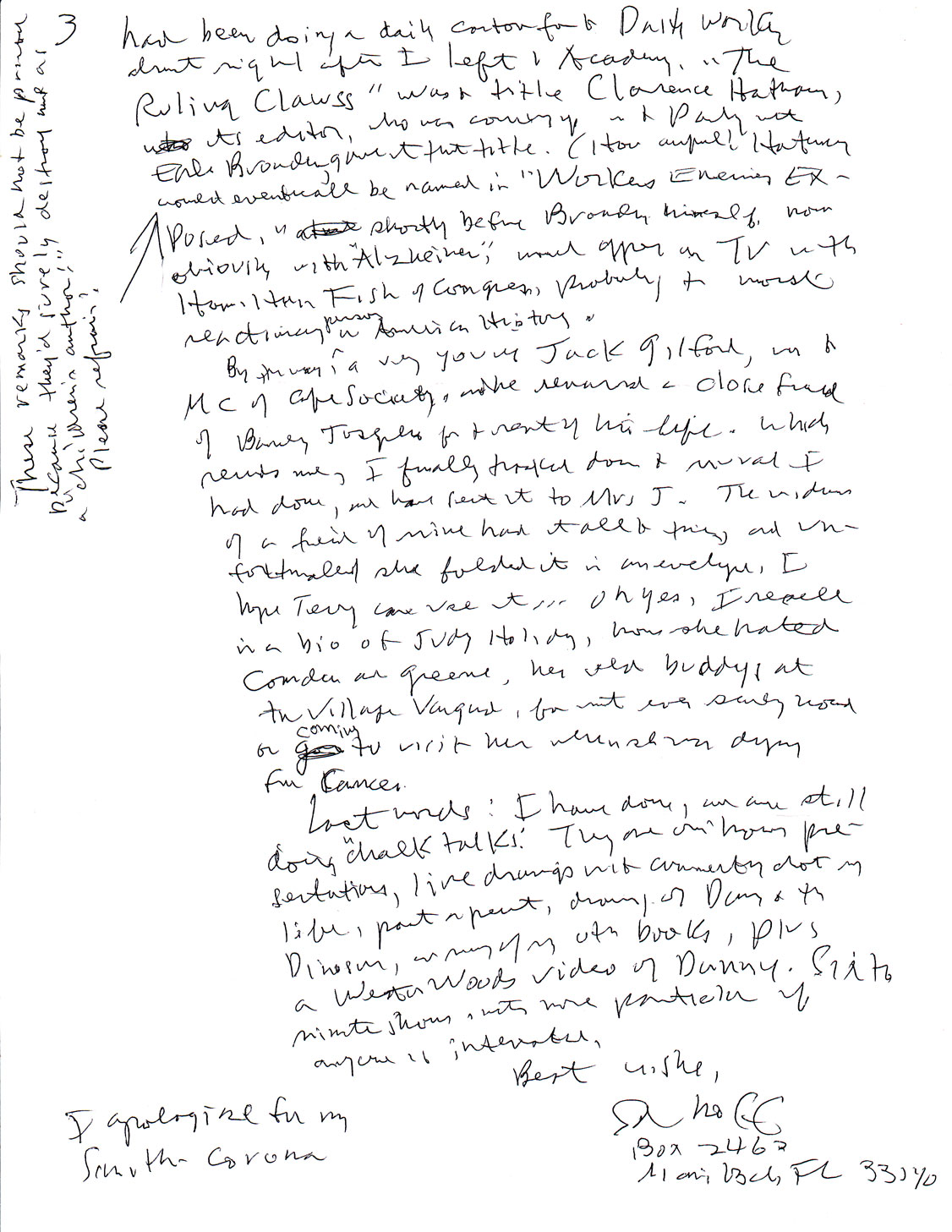 The transcription of page three:

had been doing a daily cartoon for the Daily Worker about right after I left the Academy.  “The Ruling Clawss” was the title Clarence Hathaway, its editor, who was coming up into the Party with Earl Browder gave it that title.  (How awful!  Hathaway would eventually be named in “Workers Enemies Exposed,” shortly before Browder himself, now obviously with “Alzheimer,” would appear on TV with Hamilton Fish of Congress, probably the worst reactionary person in American History.

[Marginal note with arrow pointing to above paragraph:] These remarks should not be printed because they’d destroy me as a “children’s author!”  Please refrain!

By the way, a very young Jack Gifford, was the MC of Cafe Society and he remained a close friend of Barney Josephson for the rest of his life. Which reminds me, I finally tracked down the mural I had done, and have sent it to Mrs. J. The widow of a friend of mine had it all the time, and unfortunately she folded it in an envelope.  I hope Terry can use it…  Oh yes, I recall in a bio of Judy Holiday, how she hated Comden and Greene, her old buddys at the Village Vanguard, for not ever sending word or coming to visit her when she was dying from Cancer.

Last words: I have done, am still doing “chalk talks.” They are one-hour presentations, live drawings with commentary about my life, past and present, drawings of Danny and the Dinosaur, and some of my other books, plus a Weston Woods video of Danny.  Sixty minute shows with more particulars if any one is interested.

You may be struck by the incongruity of the fact that Hoff writes, “These remarks should not be printed because they’d destroy me as a ‘children’s author!’  Please refrain!” … and yet you are reading these remarks on-line, in a public forum. What do you think you’re doing? you may be asking. Can you not keep the secrets of the dead?

Here’s my response. First, Hoff wrote those words in 2000, five decades after the blacklist.  They show how thoroughly the blacklist imprinted itself on his psyche.  He himself was never blacklisted, though he does have an FBI file. And, in 2000, the blacklist was history.  Uncovering the fact that an author or artist had contributed to the Daily Worker would not then be a career-ending revelation.

Second, this post does not break the news of Hoff’s political affiliations in the 1930s. I’m not sure who published that news first, but we might credit Julia Mickenberg’s Learning from the Left: Children’s Literature the Cold War, and Radical Politics in the United States (2006).  Julia and I also include this information in our Tales for Little Rebels (2008), which reproduces Hoff’s first children’s book, Mr. His (published by New Masses in 1939). And, of course, two earlier blog posts on this site also divulge the information: “Syd Hoff, A. Redfield, and Me” (Nov. 2010), and “Syd Hoff’s Teeth” (Feb. 2011).

Third, if we don’t know the past, then we cannot learn from it. For example, Julia discovered that children’s authors were largely exempt from the blacklist because the blacklisters thought children’s literature too unimportant a field to monitor (in part because most of its creators were women). If we keep hidden the Left affiliations of Hoff, Wanda Gág, Crockett Johnson, and others, then this understanding gets lost.

We are, at present, reliving some of the same political battles of the 1930s – the role of progressive taxation in maintaining the welfare of the many, of government investment in creating jobs, of government as a necessary regulatory mechanism (in curtailing corporate excess).  Though the Estate Tax applies only to people who leave $5 million or more, its opponents call it the Death Tax – as if it applied to everyone.  As Hoff shows in this 1939 cartoon, the Estate Tax affects only the wealthiest among us. 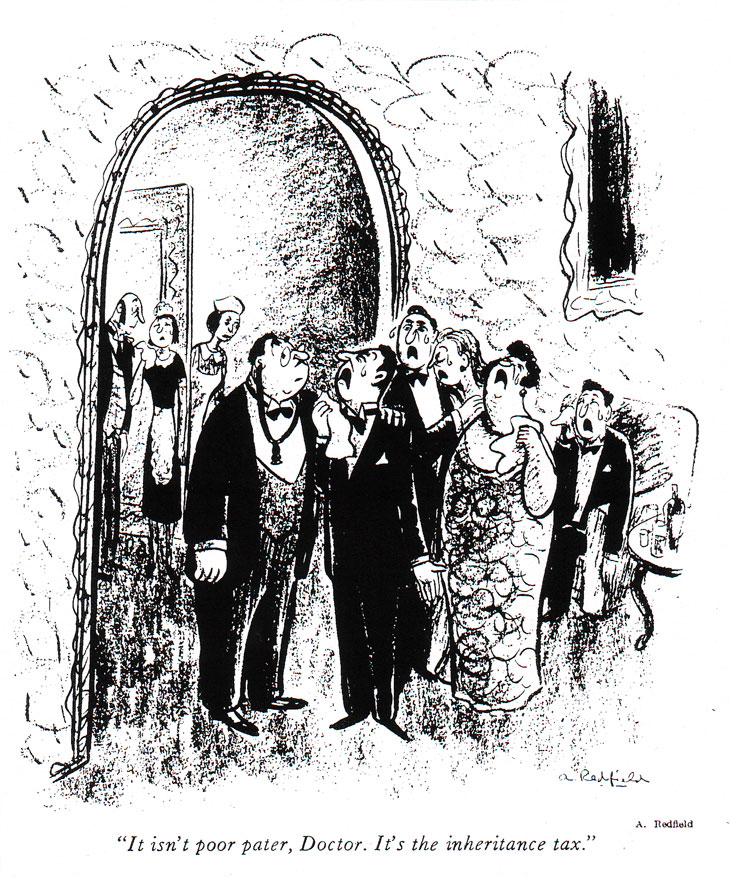 Similarly, though strategic spending by the government helped get the U.S. out of the Great Depression, opponents of such investment today allege (without evidence) that it does not create jobs.  Though reckless speculation undid the world economy in 2008, opponents of regulation allege that reinstituting rules such as those provided by the Glass-Steagall Act would somehow be deleterious to business – despite the fact that Glass-Steagall helped stabilize the economy in the 1930s. In the 1930s, progressives carried the day, instituting many of the social programs (welfare) and legislation (Fair Labor Standards Act, which abolished child labor; Minimum Wage) that we once took for granted.

History offers a guide for our future – if we’re willing to learn from it.  Occupy Wall Street notwithstanding, it’s not yet clear whether we’ll learn from the past or repeat past mistakes.