OK Go! Â They Might Be Giants! Â Joel Plaskett! Â Elvis Costello! Â R.E.M.! Â Stevie Wonder! Â Lots of musicians have recorded songs for children – either lyrically revised versions of one of their tunes, or entirely new ones. Â Here are 10 great ones. 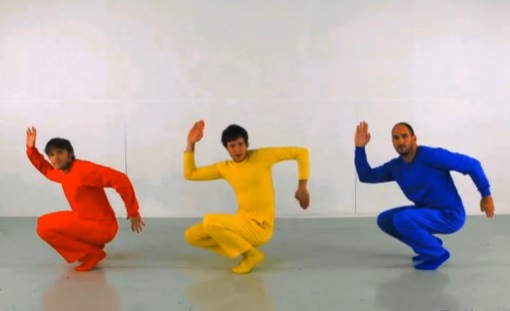 “3 Primary Colors Song” is just out from OK Go. Â It’s scheduled to appear on the February 2nd episode of Sesame Street. Â Right now, you can watch it via Rolling StoneÂ or via the embedded YouTube video below.

Joel Plaskett and a yam puppet perform a quite different version of his song “Fashionable People” (original version appears on his Ashtray Rock, 2007). Â This is from a 2012 episode of the CBC’s Kids’ CBC.

On a recent Sesame Street,Â Elvis Costello redid his “(The Angels Want to Wear My) Red Shoes” (from his brilliant debut, My Aim Is True, 1977) as “Monster Went and Ate My Red 2” (2011), with vocal assistance from Elmo. Also featuring Cookie Monster as the monster.

They Might Be Giants have released four albums for children, and all of them are super. Â Indeed, if you get the most recent three, I’d recommend buying the accompanying DVD, because the videos are a delight. Â The one below is from Here Come the 123sÂ (2008), and it’s one of my all-time favorite TMBG songs – for any age group!

Another from Sesame Street. With Stephanie d’Abruzzo singing Kate Pierson’s part, R.E.M. perform a new version of “Shiny Happy People” (Out of Time, 1991) as “Furry Happy Monsters” (1991, with new lyrics by Christopher Cerf).

While we’re thinking of Sesame Street, Stevie Wonder created his own “Sesame Street” theme song when he appeared on the show in 1972.

Paul Simon, “Me and Julio Down by the Schoolyard”

Also from Sesame Street in the early 1970s, here’s Paul Simon performing “Me and Julio Down by the Schoolyard” (1972). Â He didn’t rewrite the song for the show, but one of the kids had her own ideas about how the lyrics should go, and so the song gets revised anyway. Â “Dance, dance, dance!”

Weezer, “All My Friends Are Insects”

Weezer performs “All My Friends Are Insects” on Yo Gabba Gabba!Â in 2010. Â The person who created this video combined footage of Weezer on Yo Gabba Gabba! with footage of SpongeBob SquarePants. Â So, visually, you’re getting something a little different than what was originally on the show.

The Roots, “Lovely, Love My Family”

Also on Yo Gabba Gabba!, the Roots perform “Lovely, Love My Family” (2009). Â A very happy song, and a fine place to conclude.

Are there other great songs for children? Â Yes, of course there are. Â At some point, I’ll post my series of children’s mixes. Â But that’s all for today. Â Enjoy!

If you enjoyed these songs, you might also enjoy these mixes: