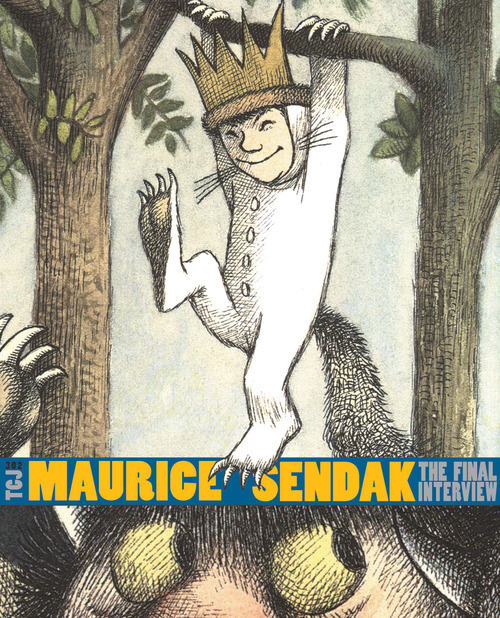 Comics people will already know what is being billed as (and probably is) Maurice Sendak’s Final Interview.Â  (It was conducted in 2011, and he died last May.)Â  So, I’m writing this for all the children’s literature people out there: here’s why you might want to read this interview, which appears in the latest issue (no. 302) of The Comics Journal.

Pre-publication, Sendak’s fantasy of assassinating President George W. Bush and Vice President Dick Cheney got the most publicity. People who didn’t know Sendak were shocked, not realizing that he was making a dark joke. That said, it’s no understatement to say that he truly despised the Bush administration. One of the first times he and I spoke (on the telephone), Maurice referred to President George W. Bush as “that fucking fuckface.” This was back in June 2001, before 9/11 became an opportunity to launch “pre-emptive war,” before Abu Ghraib, before warrantless wiretapping, before torture, and all the rest. Needless to say, Sendak’s opinion of the administration did not improve over time.

Yes, you read his nickname for Mr. Bush correctly. What’s particularly delightful about this interview is that it has not been expurgated. Often, reporters edit out Sendak’s exuberant profanity. Gary Groth (who conducted this interview) leaves it all in. As a result, when you read the interview, it sounds like Sendak talking with you. He loves Henry James, “Jew-hating motherfucker that he is.”Â  He has an irrational, “impersonal hatred” for Alec Baldwin, “that fat-faced fuck.”Â  And so on.

He and Groth talk a lot about movies, including why Buster Keaton is better than Charlie Chaplin, favorite actresses (Simone Signoret, Bette Davis, Carole Lombard) and why most contemporary films aren’t worth seeing. But they also talk about William Blake, Herman Melville, Salman Rushdie, Nathaniel Hawthorne, Franz Schubert, and Vincent Van Gogh’s wife.Â  It’s a wide-ranging interview, covering many subjects. 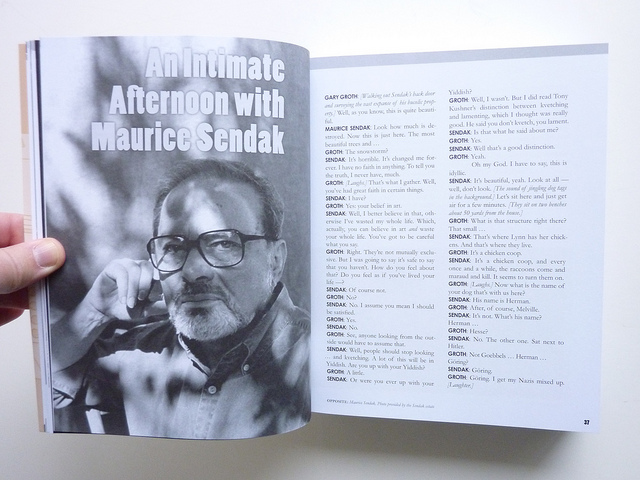 As is always the case, Sendak is quotable:

On the creative process: “I’m trying to be honest with you. That you never feel you’ve gotten it right because you have a kind of vision, or a kind of feeling. But your body, your hands, the brush in your hand –Â nothing equips you to fulfill what the original impulse was. So the original impulse is the most exciting thing” (43).

On the publishing industry: “we cannot, I think, separate ourselves from our time. Like when I began in the ’50s … Young people were welcomed. New things were happening, a surge of energy, a surge of hope. A surge of happiness. And now it’s all dwindled. And so I say, look, I’m very lucky that’s when my time was. What a blessing that I could be there and then and be with editors and people in the publishing world who appreciated young people and wanted them to be crazy like I was. Nobody wants them now” (47).

Bonus: the interview is lavishly illustrated with both art from Sendak’s books and images from other works he mentions. There’s an essay by Alexander Theroux, and a reminiscence from Gene Deitch. (I also contributed an overview of Sendak’s career.) But the interview itself will be of greatest interest.

Though lengthy, the interview does not cover everything important. They don’t talk about Ruth Krauss, one of the key professional relationships in Sendak’s life. (For that, you’ll need to read Sendak’s “Ruth Krauss & Me: A Very Special Partnership” [Horn Book, May/June 1994] or my bio. of Johnson and Krauss.) But this was to have been as the first in a series of interviews, and so Groth never got to ask all of the questions he’d planned to. In any case, for a comprehensive interview with someone as accomplished as Sendak was, you would need an entire book.