Today, I’m joining other members of K-SAFE (K-Staters Against Fatal Encounters) and the KCGFC (Kansas Coalition for a Gun-Free Campus) at the statehouse, in Topeka. Â There, we’ll hand out flyers that – we hope – will show our legislators the grave danger theÂ “Kansas Personal and Family Protection Act.” Yes, this is really theÂ name of the act that invites guns into dormitories, classrooms, counseling services, lecture halls, football stadiums, and faculty offices – and that will go into effect on July 1, 2017.

Below,Â the text of the flyer.

These moves are currently supported by the Kansas Board of Regents, who are legally charged with the safety of all Regents institutions.

Guns will be permitted on all university property:

“Nothing in our opinion should be taken to cast doubt on longstanding prohibitions on the possessionÂ of firearms by felons and the mentally ill, or laws forbidding the carrying of firearms in sensitive placesÂ such as schools and government buildings”

“Concealed carry does not transformÂ ordinary citizens into superheroes. Rather, itÂ compounds the risks to innocent lives”

Concealed carry threatens free speech. A faculty working group a the University of Houston has advised its professors: “Be careful discussing sensitive topics.” “Drop certain topics from your curriculum.” “Don’t ‘goÂ there’ if you sense anger.” 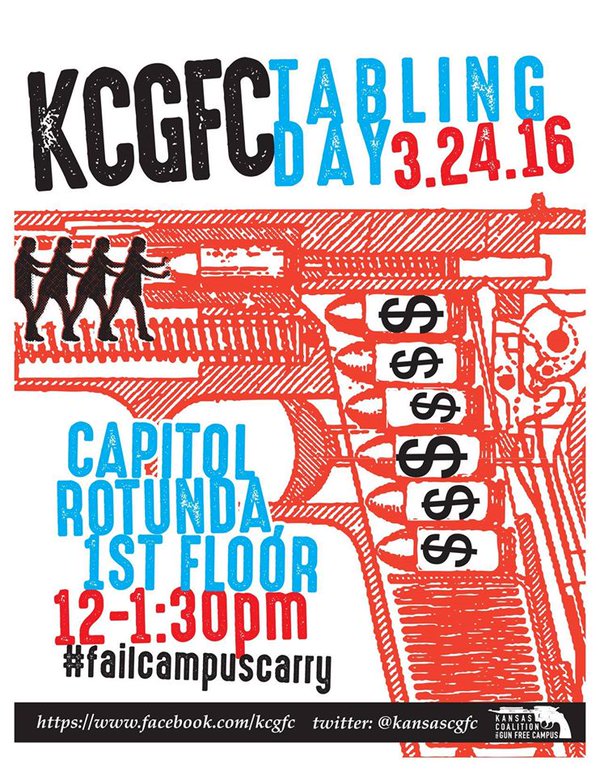 Further resources that may be of interest: