The International Research Society for Children’s Literature (IRSCL) – an organization of which I am a member – is today issuing a statement in support of academic freedom, and against the rising tide of nativism/nationalism that threatens to curtail it.Â  We’re issuing it in 20 different languages (with more to come) and you can see all of those on our YouTube channel: Arabic,Â Chinese, Danish, Dutch, English, Estonian, Farsi, Finnish, French, German, Italian, Kazakh, Korean,Â Lamnso,Â Norwegian, Polish, Portuguese, Russian, Spanish, andÂ Swedish.Â  Coming soon (we hope): Japanese and others. 30 Nov. 2017: addedÂ Ukranian, updated link toÂ Danish. 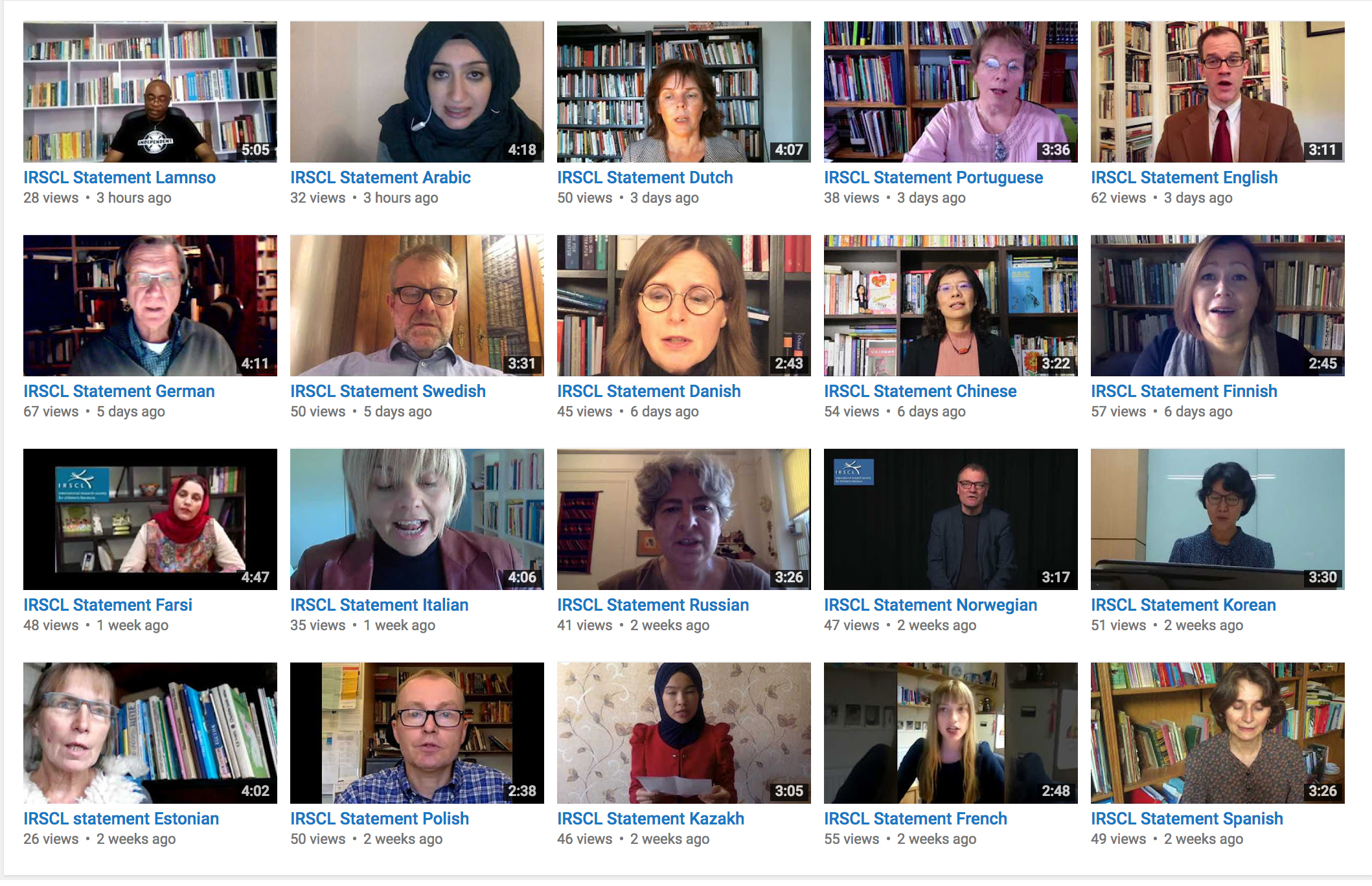 I concede that our language may be a little too “academic,” but consider that we coordinated this across borders, languages, holiday calendars, and extremely busy schedules.Â  And it’s important to speak up for our shared humanity, for a scholarly community that transcend national borders, for free and open inquiry.

(These areÂ also available en masse via our YouTube channel.)

Yes, that’s me reading it in English.Â  (I’m one of the statement’s many co-writers. )

In reading the statement (above) and writing this little blog post, I’m proud to stand with my friends and colleagues around the world.Â  And I’m especially delighted to see them speaking their native languages.Â  When we meet, we converse in English – because English is the “international” language of communication among scholars.Â  So, English-speakers like me have it easy: everyone else speaks my language.Â  But for everyone else, this is of course grossly unfair.Â  I am grateful to them for learning English so that we can share ideas, and participate in a global community.Â  And I thank them for tolerating my general inability to speak their languages.

Reading children’s books about all different people (all types of difference, though in this case, national difference) helps raise a younger generation to be less susceptible to the narrow nationalisms that pervade our political culture.Â  Diverse children’s books work because – as the research of Tali Sharot shows – emotion is more persuasive than reason. They work because, by expanding our emotional life, stories show us how we are connected –Â offering “a glimpse across the limits of our self,” as Hisham Matar puts it. And yes, yes, I know that white supremacy, xenophobia, and fascistic nationalism are resilient and adaptable –Â aided, as they are, by white fragility, white innocence, and colonial amnesia. And I know that children’s literature is but one front in a larger battle. But books for young people remain one of the best resources to oppose xenophobia and the structures that sustain it because children’s literature reaches selves still very much in the process of becoming; minds that have not yet been made up; future adults who can learn respect instead of suspicion, understanding instead of fear, and yes, even love.