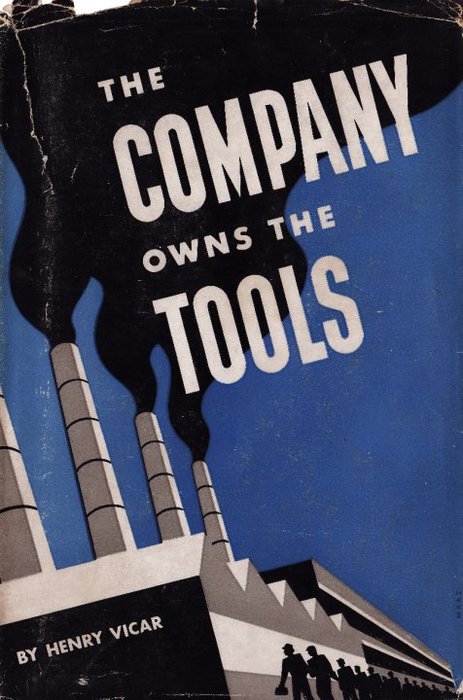 It’s Labor Day. Â Looking for a pro-labor novel for older children/young adults? Â Thanks to Archive.org, you can download (for free) the full text of The Company Owns the Tools, a 1942 novel written by Henry Gregor Felsen (1916-1995) under the pseudonym Henry Vicar.

Here’s what Julia Mickenberg has to say about the book in her excellentÂ Learning from the Left: Children’s Literature, the Cold War, and Radical Politics in the United States (Oxford UP, 2006), which (not incidentally) introduced me to this novel:

One of the few texts for children from this period that deals very explicitly with the conflict between capital and labor is Henry Gregor Felsen’sÂ story for young adultsÂ The Company Owns the Tools (1942), which he wrote under the pseudonym Henry Vicar. In this story, an honest young mechanic from a small town in Iowa gets a job in Motor City (Detroit), building cars for the war effort. There he receives a humbling lesson in assembly-line mass production, quickly deciding that the only way to maintain any dignity in his work as an individual is to band together with the other workers, despite the company’s harassment of the union and its efforts to divide works along racial lines. The logic of the union is dictated by the logic of mass production, in which each individual unit is essentially the same as any other. As one of the men puts it: “They can do without any one of us, but they can’t do without all of us.” (Learning from the Left, pp. 102-103).

Or, if you prefer a harder sell, here’s what the interior flaps of the dust jacket have to say. Â The front flap:

You’ll want a front seat at the gigantic struggle between Capital and Labor which young Hollis McEachron finds when he comes up from the country byroads face to face with Big Business – strikes, riots, company police, and union meetings.

If you are employed – if you are an employer – if you are just a spectator on the side lines watching this important development in the functioning of democracy – you’ll want to read this book!

Every man and woman in America today is vitally concerned with this question.Â  Treated as it is here, from a neutral and unbiased viewpoint, each side is focused in its true perspective.Â  Here are characters you will long remember, action you will not forget — a story which concerns you.

BORN on a farm, Henry Vicar, too, finally came to the city to live.Â  So it is not just from his extensive research that he writes the story of Hollis McEachron; it is partly from his own experience.Â  Mr. Vicar traveled widely in this country, Canada, and South America, gathering material and getting opinions from which to write this book.Â  Authoritative in its details, it is also well-balanced in its treatment of the whole problem of relationships between Capital and Labor.

Keenly interested in all of the social problems which affect the functioning of our system of government, Mr. Vicar has made a contribution in THE COMPANY OWNS THE TOOLS which will be appreciated by every thinking American, no matter what his position may be.Â  It is full of keen observations and good, hard-headed American straight thinking from start to finish.

During a research trip some years ago, I copied down both of those jacket-flap descriptions from the copy held byÂ theÂ Special Collections Research Center, E.S. Bird Library, Syracuse University. Â Thanks to Kathleen Manwaring for bringing it out to show me!

Source of image: the what what Tumblr.