Today, supporters of SenateÂ Bill 53 arrived in Topeka (Kansas’ capital), offering reasons for why firearms should not be invited onto our campus and into KU’s medical center. If you’re from a more rational U.S. state or from outside of the U.S., you may be wondering why bringing guns into classroomsÂ is evenÂ being debated. But, as of July 1, our campuses will all be weaponized. And, yes, I am serious. Â So, I and three colleagues – two professors, one graduate student – drove to Topeka together in support of a bill that, if passed, would continue to exempt universities and the med center from the Kansas Personal and Family Protection ActÂ – the official name of Kansas’ “Guns Everywhere” law. (And, yes, I am familiar with George Orwell’s works. Why do you ask?) As you can see from Regan Tokos’ photo (taken just before the hearing), above, the room was packed: standing room only, with many people spilling out into the hall. Â We supporters of SB 53 Â far outnumbered those who sought to invite guns into our classrooms, libraries, dormitories, lecture halls, offices, and laboratories. Last night, I learned that 53 people had submitted testimony supporting the measure, and only 5 people had supported testimony against it. Â The rules were: testimony must be submitted in advanceÂ in print (could not be emailed), andÂ if you also wanted to testify in person, then you also had to phone or email Senator Jacob LaTurner‘s office to let them know you planned to testify. 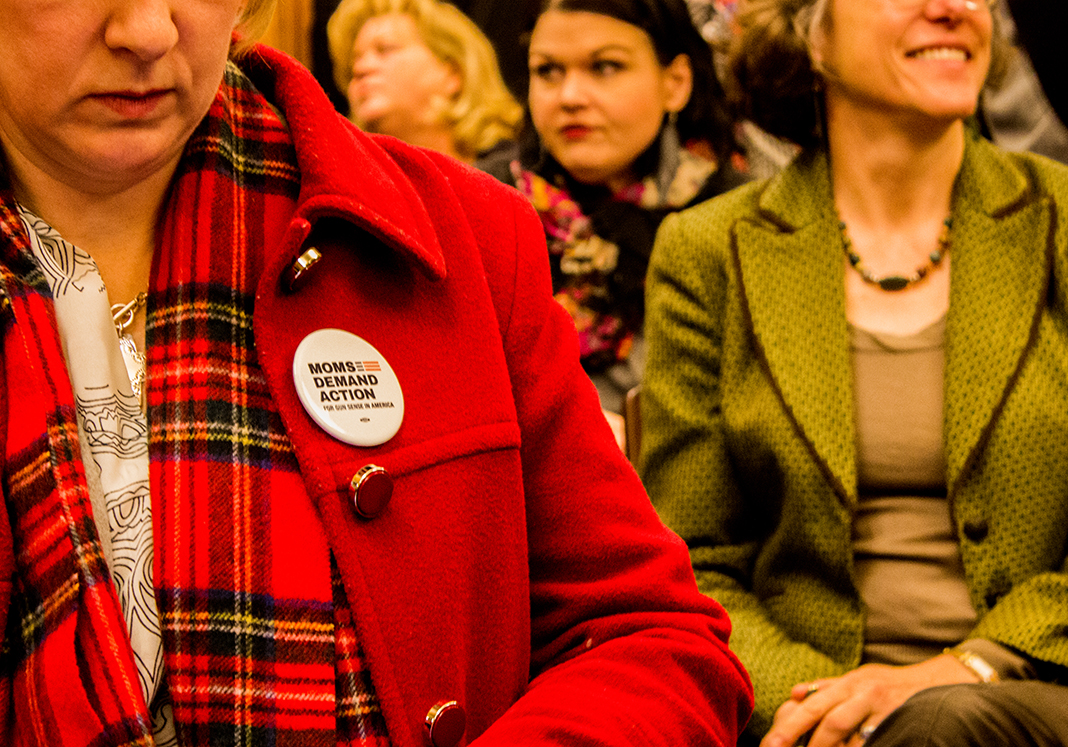 Citing our large numbers, Senator LaTurner (who chairs the committee granting the bill a hearing) gaveÂ supporters of the billÂ only 90 seconds each. He granted opponents of the bill between 2 minutes and 4 minutes 30 seconds each. (Senator LaTurner opposes the bill.) So, we all abridged our remarks on the fly. Here is my full statement. Â I managed to fit in points 2, 3, and 4 today at the hearing.

Statement in Support of SB 53

Good morning. My name is Philip Nel. I’ve called Manhattan home for over 16 years. And I’m here to urge the legislature to vote yes on Senate Bill 53. Though teaching at Kansas State University has certainly shaped my opinion on the subject, I’m here as a private citizen only. Here are five reasons you should support SB 53.

First, unlike other campus-carry states, Kansas doesn’t really regulate guns anymore –Â you don’t need a license or permit or even lessons on how to use a gun. Inviting unregulated firearms onto college campuses does not make students safer. It places them at greater risk. Accidents happen. Suicidal students with a gun are much more likely to succeed in killing themselves. College can be an emotionally volatile time. Adding unregulated guns is dangerous.

Second, the military does not allow guns in its barracks or its classrooms –Â unless the class is actually on how to use those guns. So, if trained professionals prohibit guns from their classrooms and living quarters, why should we invite people to arrive on a university campus or in a hospital armed but untrained?

Third, that whole “good guy with a gun stops a bad guy with a gun” notion is what we might call an “alternative fact.” In other words, a lie. Between 2000-2013, theÂ FBI found only 1Â of 160 active shooter incidents was stopped by aÂ civilian with a concealed carry permit. Again, that’s 1 out of 160. In contrast,Â during that same period, 21 incidents were stopped by unarmed civilians. In fact, armed civilians are much more likely to get in the way of first responders than help them.

Fourth, in a university, we are armed with reason, not weapons. University classrooms have long been a safe space for students to discuss important, contentious subjects. Campus carry would change this dynamic profoundly. In a concealed-carry classroom, every student is a potentially armed student, and thus an unspoken threat to his fellow students. In other words, campus carry revokes the safety upon which freedom of speech depends.

Fifth and finally, if the legislature passes SB 53, then it will be helping universities and the KU medical center by making them places that attract talented people –Â rather than encouraging those people to decide that, because of campus carry, they would rather take a job in another state.Â  So, please vote yes on SB 53.

Thank you for your time.

Â Thanks to LoudLight (who filmed this), you can see and hear all of the testimony.

Senator Tom Hawk (D-Manhattan) begins, and hits all of the main points of our argument – even, I was pleased to see, a citation of the Kansas State University Distinguished Professors’ opposition to campus carry. Â You’ll hear activistÂ extraordinaire (and KU grad student)Â Megan Jones at around 12 mins. in, K-State UDPÂ Elizabeth Dodd at 15:45, yours truly at about 27, K-State Associate Professor Daniel A. Hoyt at 29:15, and K-State undergrad & general force-for-good Regan Tokos at around 45 mins.

What now? Well, we next need Senator LaTurner to have the committee pass the bill out of the committee for debate of the full senate, giving all senators a chance to debate its merits. Â We also will need support from the house, and the governor. Â Incidentally, inspired by Megan Jones, I spoke with Governor Brownback before the hearing. (Megan spotted Governor Brownback first, and went up to talk to him. She was swiftly followed by Elizabeth Dodd. I was next.) We all asked him to support the safety of faculty, students and staff. He was polite and non-committal, appearing receptive to our concerns. However andÂ given his previous support for the “Guns Everywhere” law, I doubt that he will in fact support SB 53.

That said, I would very much like to be wrong, and so shall continue to speak up – and encourage you to do so, too! In particular, contact the members the Kansas Senate Federal and State Affairs Committee, and encourage them to bring the bill to the full senate for a vote. Thank you!

Related writing on this subject (by me, and on this blog unless otherwise indicated):