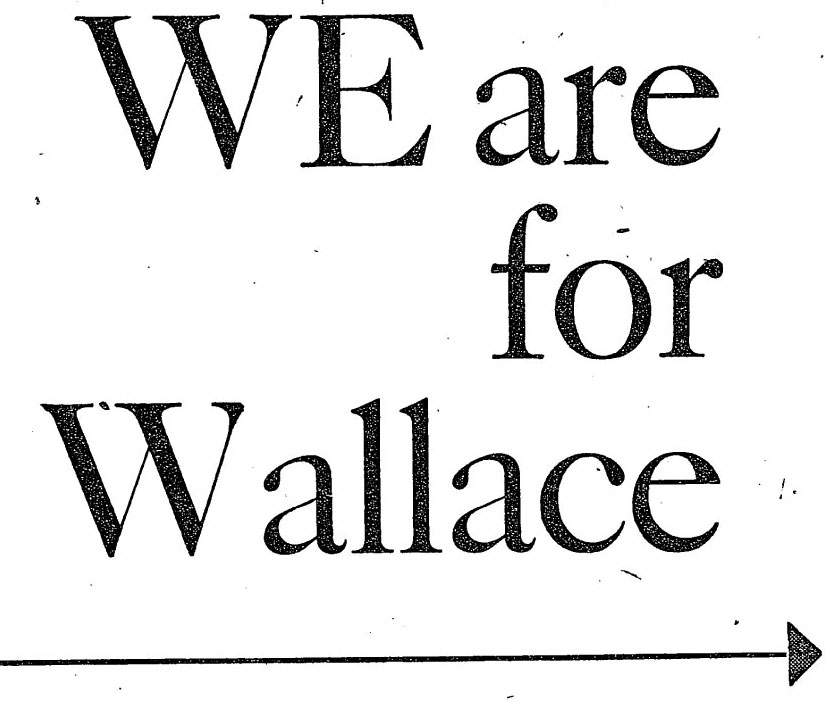 At the risk of further alienating this blog’s modest readership, here is the second of four appendices cut from The Purple Crayon and a Hole to Dig: The Lives of Crockett Johnson and Ruth Krauss (forthcoming from University Press of Mississippi, 2012). Â As is true of Appendix A, this one also registers Johnson’s alliance with the Popular Front, an anti-Fascist coalition of leftists, liberals, and even some moderates. Â (For more on the subject, please see Michael Denning’s The Cultural Front [Verso, 1998]; for more on children’s literature and the Popular Front, check out Julia Mickenberg’s Learning from the Left: Children’s Literature, the Cold War, and Radical Politics in the United States [Oxford UP, 2006].) Â At this point (1948), however, the onset of the Cold War had begun to unravel the Popular Front – Wallace, FDR’s former Vice President, now garnered the support primarily of those on the left. Â Liberals and some moderates went for Truman.

The results of this presidential election (1948) confirm the Popular Front’s demise: Progressive Party candidate Wallace came in fourth, just behind Dixiecrat Strom Thurmond. Â Republican candidate Dewey came in second (as he had done in 1944), and the Democratic nominee Truman won.

WE Are for Wallace

WE BELIEVE deeply that the words of Henry A. Wallace hold the promise of peace.

“There is no misunderstanding or difficulty between the U. S. A. and the U. S. S. R. which can be settled by force or fear and there is no difference which cannot be settled by peaceful, hopeful negotiations.Â  There is no American principle or public interest, and there is no Russian principle or public interest which would have to be sacrificed to end the cold war and open up the Century of Peace which the Century of the Common Man demands.”

WE BELIEVE with Henry Wallace that the major parties and their candidates –Â Thomas E. Dewey and Harry S. Truman –Â in bi-partisan alliance have brought us to the brink of war and fascism; that they represent in their policies the interests of the few at the expense of the many; that to a Democratic and a Republican Congress must be attributed inflation (Truman killed price control and the Republicans buried it); fear and intimidation (Truman’s Loyalty Order and the Republicans’ Thomas Committee); repression of labor (Truman charted the course for the Taft-Hartley law when he broke the railroad strike in 1946).

WE BELIEVE with Henry Wallace that America cannot be free until all men, regardless of race, color or creed, can live and work together without fear of discrimination.

WE BELIEVE with Henry Wallace that science, art, literature and education cannot flourish in an atmosphere of intimidation and policed opinion.

WE BELIEVE with Henry Wallace that the United Nations must be made effective, not by-passed or used by us or others, as a pawn in the game of power politics.

WE ARE AMERICANS loyal to our nation’s heritage.Â  We are deeply convinced that full realization of progress and freedom are possible for the people of this nation.Â  We believe that this is inherent in the program of policy of Henry A. Wallace.Â  As independents, and as artists, scientists and professionals, we are proud to pledge our support to his candidacy.

This advertisement is issued by the

Wallace, Glen Taylor and a host of celebrities.

over the American Broadcasting System

. . . and thousands of other artists, scientists and professionals whom space does not permit listing.

If you agree with us, help spread this message in newspapers throughout the country and help broadcast Henry Wallace’s message to millions of Americans in a final Election Eve broadcast.

[Following the above sentence, the ad includes a form to clip and send –Â with a contribution –Â to the National Council of the Arts, Sciences and Professions] 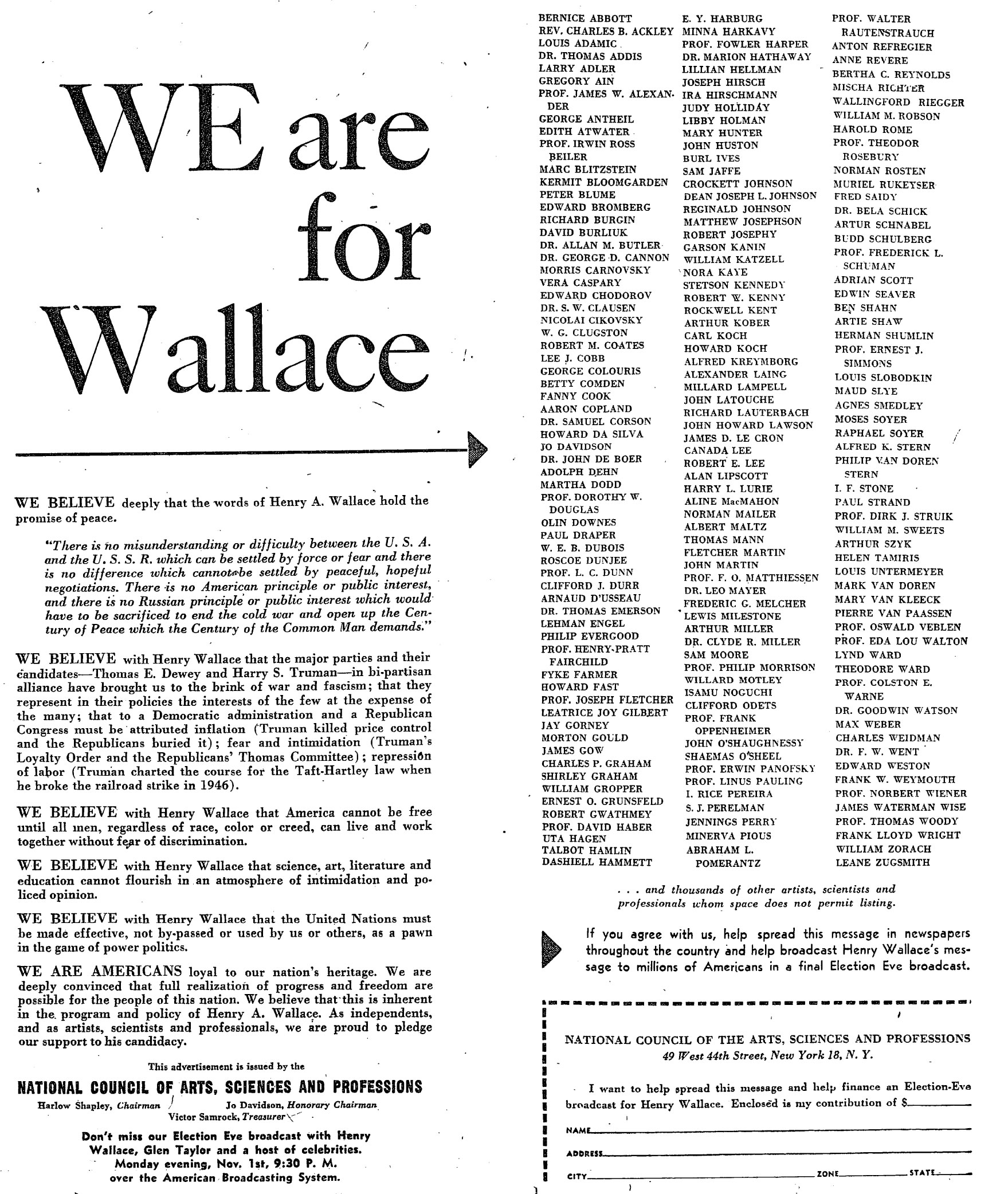 Some on the above list wrote or illustrated books for young readers: In addition to Johnson, there’s Louis Slobodkin, Mischa Richter, and Lynd Ward. Â Abraham L. Pomerantz was the father of future children’s author Charlotte Pomerantz. Â Careful readers might also notice three of the group who would be known as “The Hollywood Ten“: John Howard Lawson, Albert Maltz, and Adrian Scott.

If you liked this post, you might find the following entries mildly intriguing, since all concernÂ The Purple Crayon and a Hole to Dig: The Lives of Crockett Johnson and Ruth Krauss: