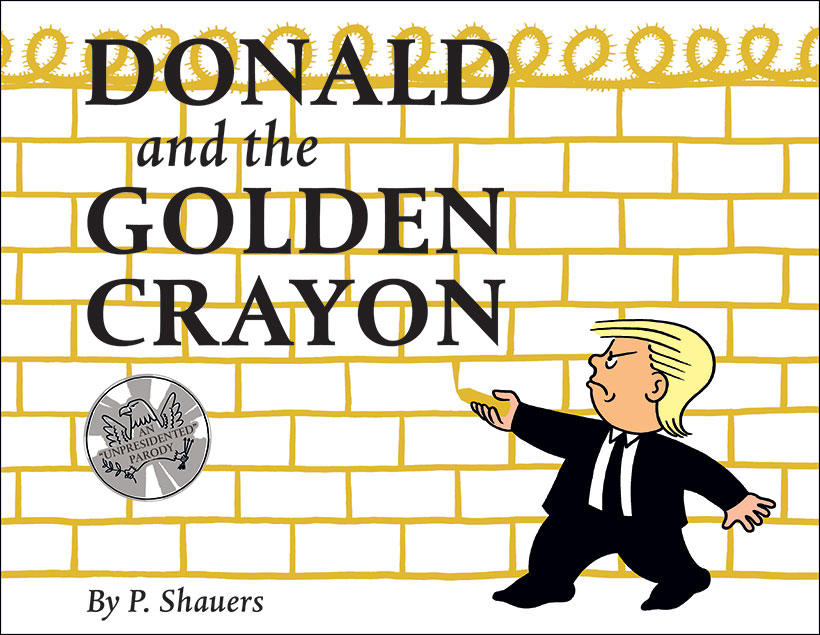 Today (20 Oct. 2018) would be Crockett Johnson’s 112th birthday.Â  In commemoration of that event, I have two –Â yes, two –Â posts for you!Â  The first is an interview with the author and the publisher of the new satirical book Donald and the Golden Crayon.Â  Enjoy!

“In the middle of the night, Donald woke from his terrific sleep and cried out ‘Covfefe!’”

So begins Donald and the Golden Crayon, the first book-length parody of Crockett Johnson’s classic Harold and the Purple Crayon (1955). It’s a reminder that, prior to his Harold books, Johnson was best known as the cartoonist behind the satirical comic strip Barnaby (1942-1952), whose five-year-old title character resembles a slightly older version of Harold. Barnaby’s garrulous trickster of a fairy godfather, Mr. O’Malley, was the vehicle for most of the strip’s satire –Â  a much more likable con-artist than the Donald who stars in this book.

Donald and the Golden Crayon spins a tale that combines the tone and sentence structure of the Harold books with the malevolence and pettiness of Donald Trump. Near the book’s end, Donald is “tired” and so “made a cozy little place to sleep” (that strongly resembles St. Basil’s Cathedral in Red Square).Â  Inside, “His room was beautiful, just beautiful. It had beautiful golden curtains, a tremendous golden statue, and a wonderful golden bed. It even had a steamy golden shower.” Trumpian adjectives bounce around in simple, Johnsonian sentences.

To me, the book reads as mockery of “President” Trump. This two-page spread (above) includes a statue of a Roman soldier brutalizing another man, and a reference to the alleged pee-pee tape –Â which also features in the book’s title, and the pseudonym P. Shauers. Earlier pages reference Donald’s racism,…

have Donald pollute the water,…

Last week at the Frankfurt Book Fair, I talked with the book’s publisher, Pete Schiffer. He assured me that the book was not taking a side on Mr. Trump. Explaining why he was drawn to the book, he said, “we liked that the book framed a lot of the commentary without being positional.”Â  So, I asked…

Me: What do you mean “without being positional”?

Pete: I mean that there isn’t a position taken. It’s just the facts given. One can read into it in any direction they would like by piecing the facts together in different ways.

Pete: They could. Depends on what perspective they’re coming from.

Pete: They could come behind it and say “Yes this is the way that things are and the way they should be” and get behind it.

Pete: People have all different opinions, and I’m not one to put any words in their mouth.

Me: So, your take on this is that it’s somewhat apolitical, as a book. It doesn’t really take a side. It’s representing a moment, and that’s all. Or am I putting words in your mouth?

Pete: No, you’re not. The intention is not to take a side –Â to put the facts out as they are and let people decide for themselves.

Pete: With people that we’ve shared it that are leaning in one direction or another, that is the response we’ve had so far is that.

Me: Interesting. The response you’ve had so far is that –?.

Pete: Depending on one’s position, they read into it based on their position.

Donald and the Golden Crayon is apolitical?Â  It’s true that irony does depend upon a community of readers who share the ironist’s understanding of the subject.Â  So, I could see how fans of 45 might enjoy simple sentence structures and spare illustrations that depict their hero’s cruelty, racism, and ignorance.Â  While I could imagine readers not getting the satire, I am skeptical of the claim that the book does not take a side.Â  Happily, the publisher very kindly put me in touch with Mr. P. Shauers himself, and we had the following conversation via email.

Nel: In talking with Pete (your publisher) at the Frankfurt Book Fair, I was struck by his comment that he seesÂ Donald and the Golden CrayonÂ as essentially apolitical.Â  He said that both critics and fans of Mr. Trump have enjoyed the book.Â  Your chosen pseudonym and the book’s mimicry of Mr. Trump’s sentences led me to interpret this as a more politically engaged work – specifically, as more anti-Trump than pro-Trump.Â  So, let me ask you.Â  Would you describeÂ Donald and the Golden CrayonÂ as more of aÂ fond homage to Mr. Trump or more of a sustained mockery of Mr. Trump?Â  Â Or how would you describe the book’s political leanings?

Shauers: Oh, it’s a mockery.Â  I think what my publisher was talking about is that everything in the book is factual, based on real quotes or events.Â  So, in that sense it is neutral, but the way Donald is portrayed is definitely meant to have him come off as cold and cruel as possible.Â  I’m very anti-Trump.Â  I’ve never been too political, because I often don’t really get what’s going on.Â  I don’t understand global economics, how deficits work, or what tariffs are good or bad.Â  But with Trump, it’s his daily cruelty and nastiness that gets me.Â  It’s the lying and bullying and company he keeps that motivated me to draw this book.

I made an odd connection while working on this…when I was in middle school, I was bullied pretty non-stop for a few years.Â  And no matter how bad it got, the school never did much about it.Â  It made me feel as if the grown-ups weren’t doing their job, and if they wouldn’t make the bullying stop, who would? I’ve been experiencing the same powerless feelings how since the election.Â  So I fight back with paper and pen.

Shauers: I see the audience as adults who are not fans of Trump, and possibly need a good laugh.Â  I don’t think kids will really get what’s going on with it.Â  While making the book I have met some conservative people who are sickened by Trump, and they have found the book to be humorous.Â  Which goes back to what the publisher was saying that both sides could enjoy it.Â  I don’t think any fanatical MAGA’s will enjoy it, in fact we’re hoping for some negative press from the deplorables.Â  I do hope the picture book community finds the book funny.

Shauers: I’m a liberal, and find myself getting more and more so as I get older, and I see what’s going on these days.Â  I was raised in a really conservative, white town and the racism and narrow-mindedness I saw growing up left a mark on me.Â  I moved to NYC when I was 18 as I couldn’t get out fast enough.

Nel: Though his politics are largely invisible in theÂ HaroldÂ books, Johnson’s earlier work had more of a satirical edge –Â Barnaby, most famously.Â  Do you know theÂ BarnabyÂ comics?Â  Did they at all influence your decision to draw upon theÂ HaroldÂ books in your parody?

Shauers: You know, I’ve read some Barnaby, but not in a long time, and only a bit of it.Â  I don’t really “know” it. It’s been on my radar to reinvestigate it again.

Nel: What influenced your decision to choose theÂ HaroldÂ stories as the vehicle for your satire?Â  I ask because this is the first book-length parody of any of Johnson’s works.

Shauers: The idea to use Harold as a base for the parody came up last year. It seems that there were some attempts to make some new Harold books, and my agent had thrown my hat in the ring as a writer/illustrator.Â  I didn’t get the project, and I don’t know what happened to it.Â  While I was thinking about it, the similarity between Harold and Donald popped into my mind, and I knew Trump signed everything with a golden sharpie, so that was the stepping off point.Â

I looked at Harold closely, and was thinking about how he makes the world as he sees it, and makes it up as he goes. Which is what Trump does, and it just seemed to click.Â  If you have to think too hard about connections within a parody, it’s not working.

Nel: In your book, what motivated the choice of Donald’sÂ Pulp Fiction/mobster suit?Â  Black (instead of Harold’s white jumper) so that you could stick to a limited color palette (as Johnson did)?Â  Visual allusion to Trump’s mob affiliations?Â  Something else?

Shauers: Hah!Â  The mob connection never crossed my mind. I tried a blue suit/red tie, which is much more his style, but it wasn’t minimal enough.Â  I really wanted it to feel like a Harold book, and they only use different values of purple, and shades of black.Â  I did keep his little footy pajamas, and they were very fun to draw.

Nel: If Harold met Donald, what would Harold do (or draw or say)?

Shauers: Yikes.Â  Let’s keep all the children away from Donald.

Nel: Your publisher said that the “P. Shauers” pseudonym was simply to avoid any confusion between this book and your many (over 40!) children’s books.Â  Are there other reasons for the pseudonym?Â  Is it say, easier, to write about Mr. Trump under the guise of a pseudonym?Â  Have you any plans to reveal your true identity?

Shauers: I used a pseudonym because I have been writing and illustrating for children since 1995.Â  I didn’t want any librarians to think this was for kids, and I didn’t want any right-wing nutjobs to go after my books in any way.Â  It just seemed easier and cleaner.Â  Recently, I had a school librarian scold me for talking politics while on my “real name” Twitter account. She said she was very offended and wouldn’t buy any of my books. So, I’m glad I chose to use P. Shauers for this.Â  Plus, it’s an easy gag. (David Milgrim used Ann Droid on his Goodnight iPad for the same reasons.)Â

If you enjoy political commentary in the guise of a children’s book, you’ll enjoy Donald and the Golden Crayon.Â  It’s a clever parody, and its thin-skinned satirical target not only lacks a sense of humor, but hates to be mocked by others.Â  So, let us continue to mock him.

Finally, if you’re an American citizen reading this, please vote!Â  The restoration of our democracy depends upon you.