Today would be Dr. Seuss’s 111th birthday! Actually, it is his 111th birthday, butÂ Theodor Seuss Geisel is not around to celebrate it – he died in 1991, at the age of 87. In his honor, here are Six Spots of Seuss News …for all of youÂ who yearn for Seuss. (For those who don’t, I have no use: go sing the bluesÂ inÂ sockless shoes.) 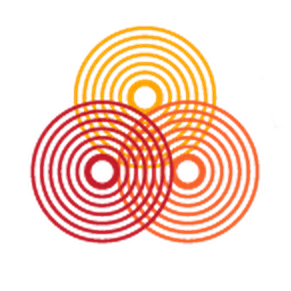 1) I’ll be talking toÂ Central Time‘s Rob Ferrett on Wisconsin Public Radio, today (March 2nd) somewhere in the 5 o’clock hour. I was told that it’d begin at 5:40 pm Central. According to WPR’s website, I will be giving “the story behind the new book,” and helping “look back at the life of the legendary author.” Â Not in Wisconsin? Â Not to worry: you can listen live. 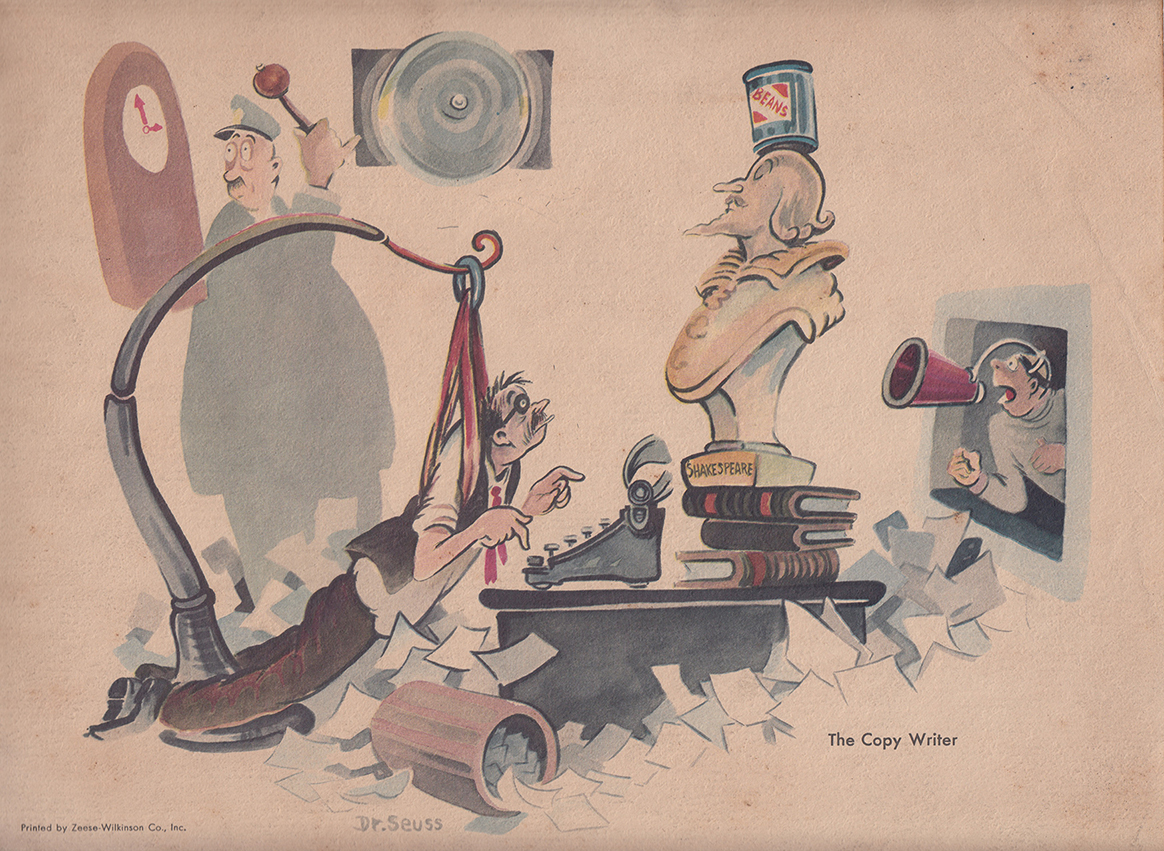 Thanks to Samantha Owen for giving this to me, as an end-of-term/successful-completion-of-her-Master’s gift, last year! Â For two more examplesÂ from “The Advertising Business at a Glance,” see p. 175 of Charles Cohen’sÂ The Seuss, the Whole Seuss, and Nothing But the Seuss (2004). Â You can find other examples of Seuss’s advertising work elsewhere on this blog, too – such as hereÂ (several examples) and hereÂ (Ford TV ad). Or, better, just go straight to UCSD’s Advertising Artwork of Dr. Seuss site. 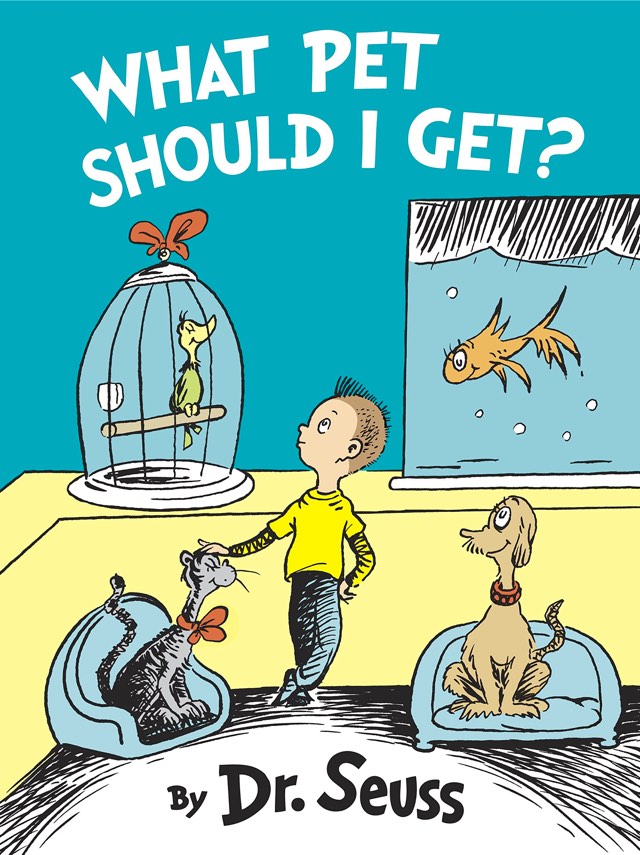 3) What Pet Should I Get? As you have no doubt heard, a new Dr. Seuss book will be published this July. People have been asking me about it. Â Here are a few answers to yourÂ questions.

Q: Have you seen it?

A: No. The manuscript is among the materials donated by Audrey Geisel (Seuss’s widow) to UCSD’s special collectionsÂ in 2013 & 2014. I haven’t done research there in about tenÂ years; I was last there in 2007, to give a lecture.

Incidentally, in its story onÂ the news of this donation, theÂ San Diego Union-Tribune published a page from what appears to beÂ What Pet Should I Get?Â  It seemsÂ that the book’s working title wasÂ Pet Store. 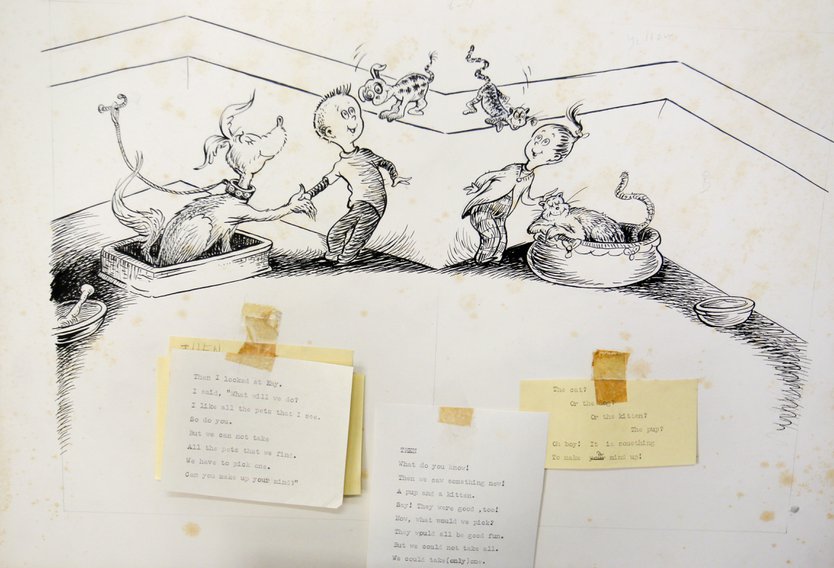 A: I have no reason to doubt its legitimacy. In addition to the existence of the above page (evidently from the book in question), Seuss wrote far, far more than he published. As he once said, “To get a sixty-page book, I may easily write a thousand pages before I’m satisfied!”

During the period that he wrote it (1958-1962, according to the press release), Seuss was so prolific that he started to publish books under other pseudonyms – that way, “Dr. Seuss”Â wouldn’t have more than one book coming out each season. The first such book wasÂ Ten Apples Up on Top! (1961), illustrated by Roy McKie and credited toÂ Theo. LeSieg (which is “Geisel” backwards). All the LeSieg books were not illustrated by Seuss. Most were done by McKie, but several featured the art of others, includingÂ New Yorker cartoonists B. Tobey, George Booth, and Charles E. Martin.

Since there were already two of his books coming out in 1961 (The Sneetches and Other Stories, andÂ Ten Apples Up on Top), Seuss may have decided against publishing another that year – or in whatever year he wrote it. He published two books in 1958, one in 1959, and two in 1960, one of which wasÂ One fish red fish blue fish.

Q: The press release says the book features the two children fromÂ One fish two fish red fish blue fish. What do you make of that?

A:Â One fish two fish red fish blue fish is a non-narrative book – Seuss’s first children’s bookÂ to lack a story. It’s more of a concept book, a series of episodes in which various fantastical creatures appear. The boy and the girl recurÂ in a dozen or so of these episodes, mostÂ of which are only a couple of pages long. 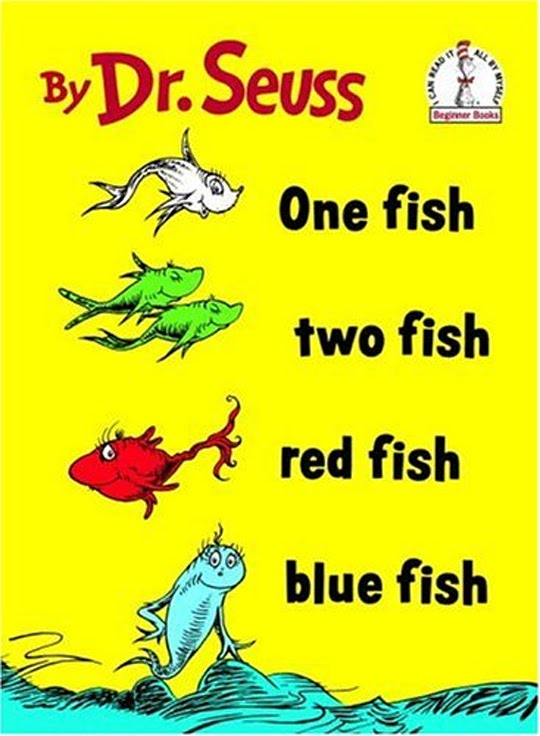 4)Â The Fish in the Court. Â Speaking ofÂ One fish two fish red fish blue fish, Justice Elena Kagan cited the book in a Supreme Court case last week. Â The gist of the case (Yates v. United States) is that, when caught with undersized grouper, a Florida fishermanÂ attempted to get rid of the evidence by throwing it (all of the fish) back into the sea. OfficialsÂ charged the fishermanÂ under the Sarbanes-Oxley Act, which prohibitsÂ destroying “any record, document, or tangible object” that might impede a federal investigation. In a 5-4 ruling, the Supreme Court actually sided with the fisherman, ruling that Sarbanes-Oxley only applied to documents and not to fish. Â In her dissenting opinion, Kagan disputed the notion that a fish is not a “tangible object”:

You can read the entire ruling on the Supreme Court’s website. Â The above appears on page p. 29 of the pdf – p. 2 of Kagan’s dissent.

Thanks to Gary R. Dyer and Nathalie op de Beeck for the tip.

Which of the following groups has no songs thatÂ reference Dr. Seuss? Also, if you try to Google this, you may get the occasional NSFW lyric. So,… don’t use Google. Use your brain.Â  Choose only the correct answer or answers. Â First person to get theÂ right answer will receive a Seuss-ish gift.Â Seriously.

A) A Tribe Called Quest

Tomorrow, I will post the answer at the very end of this post. I will also tell you which of these artists’ songs include references to Seuss or his works.

6) Was the Cat in the Hat Black? LIVE!Â March 10th! That’s “LIVE!” as in “LIVE in concert” because, on March 10th, I’ll be giving a fully illustrated version of this talk plus (for the first time!) some of the introduction to the book of which it will be a part. Â When? Where?

It’s atÂ 4:15 pm, Watson Forum, at DePauw University, in Greencastle, Indiana. Â More details via DePauw’s Dept. of English “Events” page. Â Another reason for you to come: Michelle Martin will be giving a talk at 7:30 pm, in the Prindle Auditorium: “From the Kitchen to the Edges: Hair Representations in African AmericanÂ Children’s Picture Books.” Â These are free and open to the public.

If you’d like to read “Was the Cat in the Hat Black?,” click on this sentence and/or email me for a copy.

Since it is Seuss’s birthday, you might enjoy perusing other posts taggedÂ Seuss. Â Here’s a selection:

Alas, Cat’s valiant guess proves incorrect. Â Apart from her, no one else took a stab at the question. I put the quiz in at no. 5 to see if anyone would actually read that far down. Either only Cat did, or my quiz measured not readership but the difficulty of answering the question.

The correct answer is C) Blackalicious. Â You’d think that the group behindÂ “Alphabet Aerobics” would have a song that references Dr. Seuss. Â But, as far as I know, they don’t. Â A Tribe Called Quest has an R-rated Seuss reference in “Clap Your Hands” (1993). Â Seuss’s Green Eggs and Ham makes an appearance in Beastie Boys’ “Egg Man” (1989) and getsÂ alluded to inÂ 3rd Bass’s “Pop Goes the Weasel” and “Green Eggs and Swine” (both 1991). Â RUN-DMC name-checks Seuss in “Peter Piper” (1986), and Michael Franti & Spearhead’s “East to the West” (2006) mentions “the Lorax who speaks for the trees.”