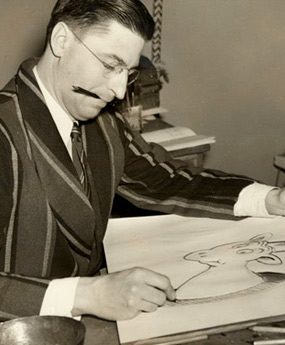 As a famous author whose life spanned the twentieth century, Dr. Seuss (1904-1991) should have been often in newsreels and on TV, right? From time to time, heÂ does appear on cameraÂ – but less often than we might expect. In celebration of what would have been his 112th birthday, here’s a brief (but far from complete) collection of Seuss on film!

The earliest known film footage of Dr. Seuss is in color! Â Sadly, there’s no audio. But you do get to see him withÂ the sculptures he was making. He called them “Unorthodox Taxidermy” and sold them via mail. Â Though his fourth children’s book (Horton Hatches the Egg) was published the same year as this clip, Seuss’s main occupation at this time was advertising: the “Seuss Navy” line in the narration references his adds for Esso. Â Also, though the narrator describes him as a “doctor of literature,” he wasn’t. Â He dropped out of his M.A. program, and never pursued the Ph.D. Â But heÂ did use “Dr.” for his professional pseudonym.

Horton Hatches the Egg would be Seuss’s last children’s book until 1947. With the World War raging in Europe and the Pacific, Seuss set aside children’s books and “Unorthodox Taxidermy.” Instead, he beganÂ working onÂ propaganda – first, political cartoons, and next, educational videos for the U.S. Army.

The way I went to work for PM is that I got annoyed with Lindbergh and his America-Firsters. I was already somewhat prominent as a cartoonist, but nobody would print my cartoons against Lindbergh. So I went to work for PM for almost nothing. When the United States got into the war I started receiving a lot of letters saying I was a dirty old man who had helped get us into the war, and I was too old to fight. So I enlisted.

In January 1943, after having written over 400 political cartoonsÂ for PM, Geisel left New York and took the train out to Hollywood, California, where he would be a captain in the U.S. Army’s Information and Education Division – “Fort Fox,” headed byÂ Major Frank Capra, the Oscar-winning director.

Capra placed Ted Geisel in charge of the animation branch and assigned him to make educational films that would run in the Army-Navy Screen Magazine, a biweekly newsreel shown to the troops. Ted Geisel and Phil Eastman (later famous for Go, Dog. Go!, but then an ex-Disney animator)Â teamed up with directors Chuck Jones and Friz Freleng; vocal impressionist Mel Blanc; composer Carl Stalling; and the other creative minds behind Bugs Bunny, Daffy Duck, and Porky Pig. Exactly who came up with the idea of Private SNAFU is not clear, but the idea itself was simple: Teaching by negative example, Private SNAFU would embody his name, an acronym for (as the first cartoon put it) “Situation Normal All … All Fouled Up.”1

In the clip below, you’ll see Ted Geisel, at the desk on the left (0:15-0:40). Â As Jerry Beck says, the clip is “unedited footage shot by the First Motion Picture unit, likely intended to be used for a newsreel or other production.” Â They’ve added some of Stalling’s score (fromÂ SNAFU shorts) as a soundtrack. Though BeckÂ lists this piece as circa 1944, I think it slightly more likely to have been 1943: once the SNAFU cartoons started being screenedÂ (July 1943), they were very popular. By 1944, there would have been no need to create promotional footage. But either date is close enough.

Up until 1957, Seuss was more famous for his advertising work than his children’s books. Then, he published The Cat in the Hat (spring, 1957) and How the Grinch Stole Christmas! (fall, 1957) – both of which were very popular and, to this day, remain two of his best-known works. Buoyed byÂ this popularity, he appeared on the April 29, 1958 episode of the TV quiz showÂ To Tell the Truth.

During a book tour inÂ Australia and New Zealand, Seuss visited Auckland’s May Road School, where this filmÂ was made. This is my favorite footage of Dr. Seuss because he’s improvising with the children, playfully answering their questions with what he was by then callingÂ “logicalÂ nonsense.” I also like it because it refutes the oft-repeated claim that Seuss did not like children. His response to children was similar to his response to adults: he liked some, and not others.

Since it is Seuss’s birthday, you might enjoy perusing other posts taggedÂ Seuss. Here’s a selection:

From time to time, I get asked to talk about Dr. Seuss: