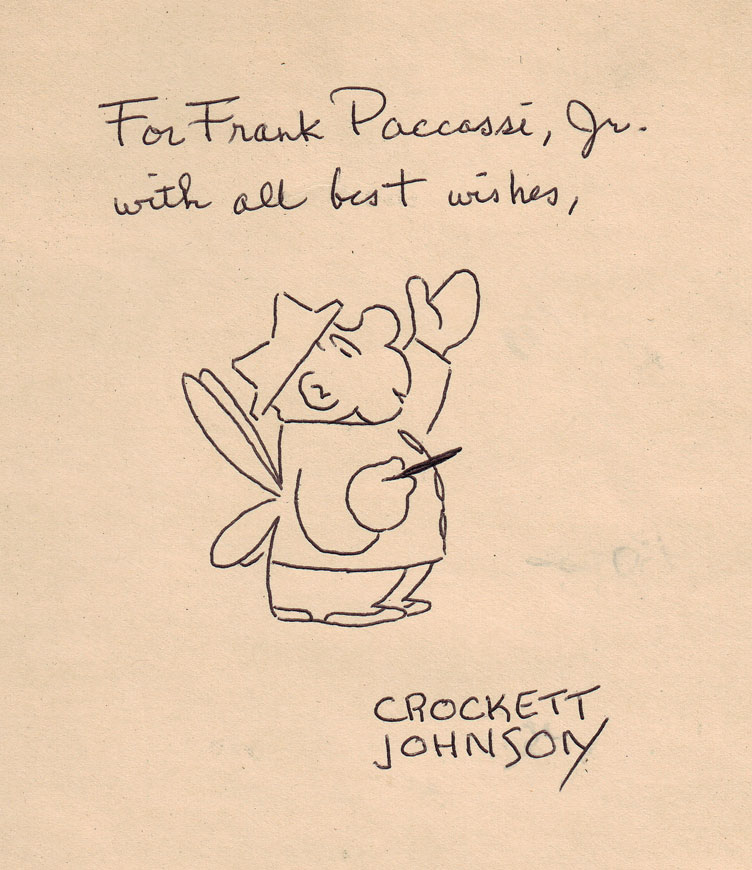 The drawing comes to us courtesy of Vicki Smith, the daughter of a friend of Frank Paccassi, Jr. Â When her mother (who had inherited the drawing from Ms. Smith’s late father) passed away, she sent me Mr. Paccassi’s collection of 1960-1962 BarnabyÂ strips, along with the above drawing and a couple of penny postcards from Crockett Johnson. Â A fan of Barnaby, Mr. Paccassi had written to Johnson in the fall of 1962 about obtaining copies of the 1960-1962 run (which had then just concluded). Â Johnson obligingly sent him “some extra release proofs I have no use for,” and signed Mr. Paccassi’s copies of BarnabyÂ (1943) and Barnaby and Mr. O’MalleyÂ (1944).

As readers of this blog will already know, this is shaping up to be a good year for Crockett Johnson fans:

Indeed, the page proofs for the latter arrived this past Tuesday. Â I’ve been reviewing them and constructing the index. Â Since they are due back at the end of the month and since I have many other deadlines this month, the blog may be slightly quieter than usual – or the posts may be more brief.

But the many posts devoted to Crockett Johnson and Barnaby should (I hope) keep you amused. Â Depending on your stamina and level of interest, there’s a great deal here related to the creation of the biography. Â I’ll list some (well,Â far too many) below: